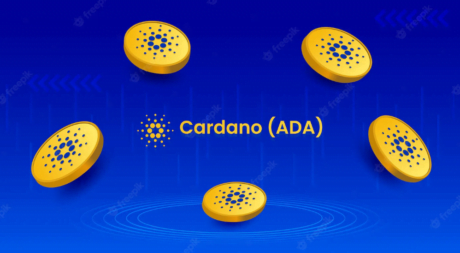 Cardano (ADA) declined significantly over the past few days, resulting in a price drop of 22.6%.

The expanded selling activity results in the offshoot of the critical supporting EMAs that are attempting to break the support zone of $0.45. So, this provides an opportunity for buyers to take advantage of price drops.

The ADA/USD price shows a bullish reversal swinging from $0.4 forming a rising channel pattern with a price spike of 47.5%. On the other hand, the price rejection presents at the $0.595 level to support the 22.6% price decline; which shreds below the support trend line.

As of this writing, Cardano’s price shows a bearish movement as it trades at $0.4551 or a decline of 3.07%, according to CoinMarketCap.

On the daily chart, the ADA price demonstrates the formation of a triple black crow pattern that shows some significant struggle with hedging on the support of $0.45.

More so, the intensified selling pressure is apparent, especially with the sudden surge in intraday trading volume plus the appearance of long-wick candles.

The bearish continuance seen over the daily chart strengthens the possibility of ADA having a downtrend or falling below the key support zone of $0.45.

With that in mind, a short-selling opportunity could arise with the shackling of the key support zone with the opportunity of a 13% decline to revert to July’s low that registered at $0.4.

On the other hand, if there is a price rejection that coincides with the bullish reversal on the $0.45 support zone, then this could trigger a price increase that hovers above the 50-day EMA.

RSI for ADA shows a dramatic increase in the coin’s bearish character as it plunges below the 14-day half line or average line.

A few days ago, ADA created this fake breakout that caused confusion for market participants. It was observed that ADA price rose to $0.55 and then dipped below in a few days’ time registering a week’s loss of 12.9%. With these figures, ADA is seen to fall below the mark, especially this August.

The general outlook for Cardano remains extremely bearish. The MACD signals also show that ADA price may revisit its lows seen in mid-July with the ongoing correction.