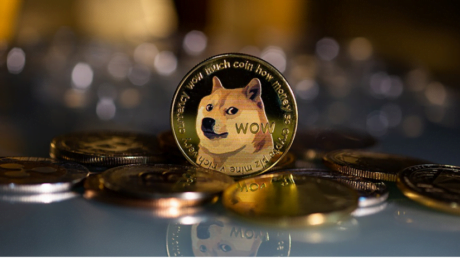 Dogecoin (DOGE), Elon Musk’s favorite dog meme coin, has spiked by 15%.  Monday was phenomenal for Dogecoin as it surged by more than 16% and the meme coin is just warming up.

And it’s not just Dogecoin that’s enjoying the bullish movement because other dog meme coins like Shiba Inu have had explosive growth fell over the weekend with the upcoming Ethereum network upgrade.

Dogecoin To Breach Key Resistance At $0.087

According to CoinMarketCap, the DOGE price has plunged by 4.08% or is trading at 0.0829 as of this writing.

At this point, DOGE’s goal is to breach the key resistance level of $0.087. If Dogecoin can successfully breach this barrier and fix its hold on the price, then the coin may see unprecedented growth in the coming days.

There is some buzz going on that refers to DOGE’s growth as fake and artificial because it’s linked to the upcoming launch of layer 2 Ethereum.

But, traders are warned to be cautious with fake projects or initiatives that may not be what it looks like.

One frightening fact is that there are many scams online that link themselves to Dogecoin for that clout effect.

There was some point in time, wherein the Dogecoin developers and community announced warnings to inform everyone to steer clear of chains that have the prefix DOGE.

Now, if the growth of DOGE is brought about by these fake projects then it would be easy to assume that Dogecoin’s growth is purely artificial because it uses popular influencers to promote the fakery in an effort to mislead users.

Investors are now awaiting entry and positioned themselves just in time for DOGE’s merge with Ethereum.

This software upgrade is bound to happen in September 2022 which aims to transform Ethereum from a proof-of-work to a proof-of-stake mechanism.

Hayden Hughes, Alpha Impact CEO, is confident that retail investors have renewed confidence in DOGE which will impact not just DOGE but also SHIB and DOGE.

Both DOGE and SHIB made a breach over the weekend indicating the revival of investor confidence.

However, Cici Lu, CEO of Venn Link Partners, warned that traders be careful with meme coins because it lacks utilitarian and market value compared to Ethereum and Bitcoin.

Judging by DOGE’s technical outlook, Dogecoin’s price made a pullback coming from $0.0847 which may be long-term.

More so, the 100-day SMA has been set in motion to avoid DOGE from weakening or pushing below the coin’s primary support spotted at $0.0700. With relatively little push, the DOGE price may soar to more than $0.1000.

PrevPreviousEx-BitMEX CEO says short ETH before Merge, but should you?
NextBitcoin May Hit $10K As Price Slides Pre-FOMC MeetingNext