Dogecoin surged over 100% and broke $0.12 against the US Dollar. Dogecoin is correcting gains, but dips might be limited below the $0.10 level.

Dogecoin extended its rally and it cleared the $0.1000 and $0.1200 resistance levels against the US dollar.
The price is trading well above the $0.1000 zone and the 100-day simple moving average.
There was a break above a major bearish trend line with resistance near $0.070 on the daily chart of the DOGE/USD pair (data source from Kraken).
The pair is correcting gains, but the bulls might remain active near the $0.10 zone.

This past week, dogecoin saw a strong bullish wave from the $0.055 support zone. DOGE rallied significantly above the $0.070 resistance, outpacing bitcoin and ethereum.

If the DOGE price remains stable above the $0.1000 support, there are chances of more gains. An initial resistance on the upside is near the $0.1250 level.

4-Hours MACD – The MACD for DOGE/USD is now losing momentum in the bullish zone.

4-Hours RSI (Relative Strength Index) – The RSI for DOGE/USD is now in the overbought zone. 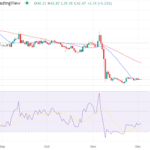