Is Bitcoin Like Buying Google Early? Check Out The Shocking Comparison 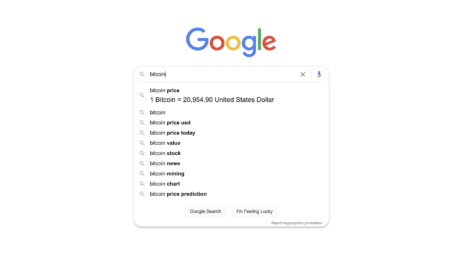 Before the recent selloff, Bitcoin was positioned as the next big thing. Investing and trading legends like billionaire philanthropist Paul Tudor Jones say it is like investing in Steve Jobs’ Apple early, or like getting in on the ground floor on Google.

A new comparison suggests that even the latest price action is very much like if you had bought Google early. Here is a closer look at the shocking comparison along with the happy ending that should give crypto holders feeling uneasy some comfort.

Bitcoin Versus Google Comparison Predicts Bull Finale Ahead Of Recession

Bitcoin is a hard subject for many to wrap their head around. The lack of a physical object associated with the asset makes it feel more akin to magic internet money.

Related Reading | Bitcoin Weekly RSI Sets Record For Most Oversold In History, What Comes Next?

Those who do properly comprehend the cryptocurrency’s potential, compare it to like investing in a piece of the internet. It has also been compared to investing in Apple or Google early.  However, a new comparison inspired by technical analyst Gert van Lagen shows just how accurate that statement might be.

BTCUSD compared to Google during prior to The Great Recession | Source: BTCUSD on TradingView.com

On the left, is the last decade plus of Bitcoin price action. On the right is Google just ahead of The Great Recession. With a recession possibly ahead of us, the comparison isn’t without merit.

The Happy Ending For Google: A Search Engine Giant Emerges

The above comparison has been changed from the analyst’s initial interpretation, but the comparison remains just as jarring. The example suggests that Bitcoin is nowhere near done with the current cycle. Although that provides hope for bulls, the same comparison does show the primary motive wave coming to a conclusion with wave 5, taking the price of Google back to below wave 4.

Related Reading | Did A “Zig-Zag” Correction Shake Out The Crypto Market?

If the same were to happen to Bitcoin, price could fall below the 2017 low eventually, reaching $2,000 per coin during any recession ahead – if it occurs. Many believe the recession is already here, which is why the recent crypto selloff has been so severe. If it isn’t, the market could recover to new highs and while the market is blind, the recession could finally creep in.

Although the correction was especially severe, Google did just fine | Source: NASDAQ-GOOGL on TradingView.com

Ultimately, the correction ended, and the primary uptrend continued higher. The technical analysis methods used in the above charts is referred to as Elliott Wave Theory. The study believes that all markets move in the same wave patterns based on human emotion cycles, hence why the same patterns could appear in two entirely different assets.

INVITE: join @elliottwaveintl for a FREE live #crypto trading webinar on 6/28 @ 11am.

You can sign up for free at this link https://t.co/Hi2WUPW22y pic.twitter.com/MKMTtjZYPa