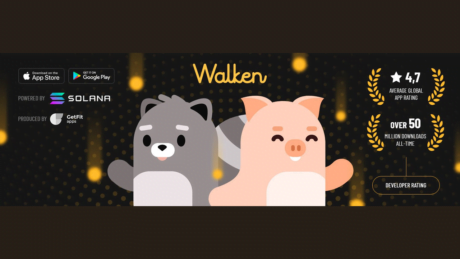 Solana-based blockchain gaming platform, Walken announces a new roadmap and features that boost the user experience and overall growth of the platform!

Walken, a move-to-earn player game, has unveiled its latest roadmap in a bid to continue its trajectory to sustainable growth, building momentum and substantial overall growth, a statement from the team reads. The new-improved roadmap introduces several new features including new game modes, better social interaction components, and new partnerships to boost the overall growth of the platform.

Announced Monday, the new developments will be implemented on the platform in the coming months, offering users more fun and sustainable platform enabling them to maintain a healthy lifestyle while having an opportunity to earn crypto.

“One of the main challenges of any gamified web3 project is to make it both fun and sustainable, especially a free2play one,” Walken Co-founder and CEO Alexei Kulevets said. “With Walken, we are proving the point that it’s possible. We are grateful to our amazing community and work hard to make it even better”.

Some of the key developments and updates that stand out on the new roadmap include better localization support of the app with seven new languages added, a plan to use over 60 million community-generated WLKN tokens to re-invest in the app and add value across the ecosystem, and the development of a new game that features CAThletes (NFT figures on the app).

Additionally, the new roadmap aims to build momentum and continue its sublime growth trajectory by introducing ‘The Walken Ambassador program’ to support local communities across the world and a dedicated referral program with associated bonuses. Notwithstanding, Walken will build new game modes such as tournaments and new race modes as well as social interaction features e.g. friend chats to enhance cooperation across its community.

Launched in 2022, the Walken gaming app is being developed to connect real-world sporting activities with online gaming and earning crypto. The fast-growing app aims to gamify a healthier lifestyle via the use of blockchain technology and financially incentivising users through its WLKN tokens.

“Gamifying ways for people to become healthy and adding financial incentives to stick to those routines are one of the biggest industry opportunities in all of Web3,” the team statement reads.

These developments will enable Walken to continue its impressive growth, especially by growing its community. With the vision of the new roadmap and features perfectly aligned with the company’s goals, the platform could be on the way to becoming one of the largest gaming platforms across the Web 3 industry.

Adding to the new proposed roadmap, Walken also shared some in-game economy statistics that show the sublime growth of the platform and expansion of its ecosystem in recent months. Following a rapid start in the user growth of its iOS app, the Walken Android app flipped the numbers in early August 2022 to become the largest Walken app currently with over 7,000new unique daily users, whereas iOS contributes to over 1,000 new daily users.

Additionally, the app recorded peaks of over 20,000 new daily users across July and August 2022, with over 1.11 million users recorded to have used the platform to date. The majority of the users hail from Russia and Ukraine, 19.6% and 10.4% respectively, with India coming in third at 7.34% of the users and Vietnam fourth with 5.13% of the daily users. According to the team, the number of users could well boost past 2 million by Q4 2022, as data collected across global regions showcases people are willing to dive into Web3 and unlock the benefits it can provide.